The first release collected great feedbacks from the critics thanks to a tight and impactful sound, enriched by catchy melodies, inspired by ’90s power metal. Moreover, the album saw the participation of Fabio Lione as guest on a track, that added further value to the whole work.

Between 2013 and 2016, the band pushed his live activity in clubs and festival all around Italy, sharing the stage with important artists like Freedom Call, Fabio Lione, Trick or Treat, Kaledon, Vanexa, Sabotage and in an open air festival in Kiev with Blind Guardian and Rotting Christ.

In October 2016 after some changes of musical style and line-up, the band recorded at Domination Studio with Simone Mularoni the second full length, called “Descending: A Devilish Comedy” which was released on June 2017.

Descending presents a much modern and heavy sound totally different from the first release of the band. It’s a concept album who runs through the circles of hell, which exist only in our minds, where all the fears, vices, virtues and the dark side of the human kind are showed in the form of a theatre comedy.

Thereafter, Altair treaded the boards  in East Europe and Italy, also supporting Alestorm in a local event in Bucharest. The band actually is scheduling gigs for 2019 and working on a new album. 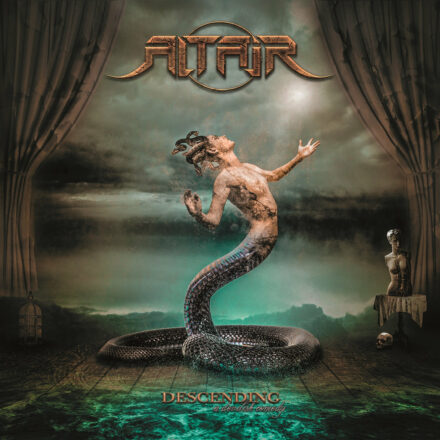