Power Metal, Prog, Melodic Metal, Hard Rock, – descriptions touching on multiple genres of heavy music today, none seem to do justice to the music that is Azraels Bane. Based in Houston, Texas, Azraels Bane was formed in the summer of 2002. Its members, all seasoned veterans of the heavy rock and metal scene sought to create music that was new, powerful, and different from the norm. They have since developed a large following through regional touring, becoming one of the top drawing bands in the area. Azraels Bane have shared the stage with international acts such as Motorhead, Hammerfall, WASP, Danzig, Ripper Owens, George Lynch (Dokken), Metal Church, Nevermore, Jag Panzer, Quiet Riot, LA Guns, Into Eternity, Lillian Axe, F5 and Neal Turbin among others including a slot on one of the world’s largest Latin American festivals, the Monterrey Metal Fest in 2005. The band signed a 2 CD deal with Chavis Records in the summer of 2005 releasing the highly acclaimed debut CD “Wings of Innocence”. The CD has received high marks from the press as well as brisk sales worldwide. The band is currently recording their sophomore CD, entitled “Modern Day Babylon” at Houston’s Diamond Studio, again working with acclaimed producer and engineer Gregg Gill (Stride, Outworld, Distant Thunder, Z lot Z) with a scheduled release date of summer 2007. With soaring clean vocals, shred oriented musicianship, five part vocal harmonies, and an emphasis on memorable, hook-laden songwriting, Azrael’s Bane are poised to make their mark on today’s metal music landscape. 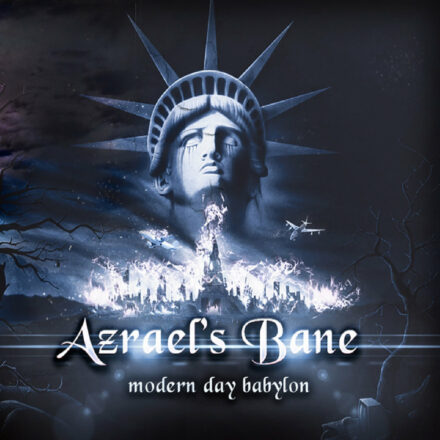