“All Hat No Cattle”

The Debut Album Of The Greek Heavy/rock sensation!
Lazy Man’s Load (aka LML) are born in the beginning of 2017. Without wasting their time and just few months later, they released their first single video clip “Start Breathing” at the end of summer 2017! Next year, January of 2018, they released another single-video clip, entitled “Persian Mistress”. The first live appearances of LML on stage, were as mini tour, supporting the British band Skandal (in Greek cities Ioannina, Arta and Patra) and then they continued with a headline live show in their hometown, Athens, with other bands of Greek underground rock scene. Then followed many live shows like in Let It Beer 3 andκαι 4 fests, opening for bands like Tuber, Naxatras, Rusty Bonez and Mora Sti Fotia, and in legendary venues like An Club (playing with Beggars) and Temple (with Crashes).
During the quarantine due the pandemic, they found the time to complete their debut album “All Hat No Cattle”. They came in touch with Sleaszy Rider SRL, and got a record deal directly, as their music and the album is really a great mix of heavy metal, hard rock, southern and stoner metal. The concept album is telling the stories of Lazy Man, the main character of the concept, and his adventures in the desert of a post-apocalyptic dystopia, an enviroment that influences mainly the music of Lazy Man Load! 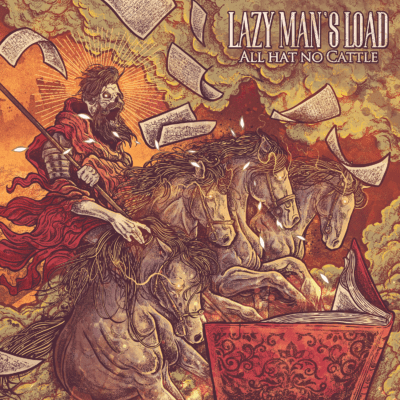 All Hat No Cattle