Darzamat - A Philosopher At The End Of The Universe

The 6th full length album of Polish dark metal legends DARZAMAT, first after 11 years of silence!
The band is back with another concept album, that opens a new era in DARZAMAT’s history—gone are the keyboards, up till now characteristically prominent. In their place the band inserts more diversified and complex guitar sounds. A dark metal masterpiece, mixing atmospheric black metal, death and gothic metal, with male and female vocals as well.Pre-production for A Philosopher at the End of the Universe was overseen by Maurycy ‘Mauser’ Stefanowicz of Vader fame; production and mixing were handled by one of the most talented Polish producers, Jarosław Baran.
For fans of Behemoth, Cradle Of Filth, Rotting Christ, Moonspell, Tiamat, Dimmu Borgir, Trail Of Tears, Dismal Euphony.
Album of the month in Polish Metal Hammer magazine!

Tracklist:
Reminiscence
A Philosopher At The End Of The Universe
Running In The Dark
Thoughts to Weigh On Farewell Day
The Tearful Game
The Sleeping Prophet
Clouds, Clouds, Darkening All
The Great Blaze
The Kaleidoscope Of Retreat 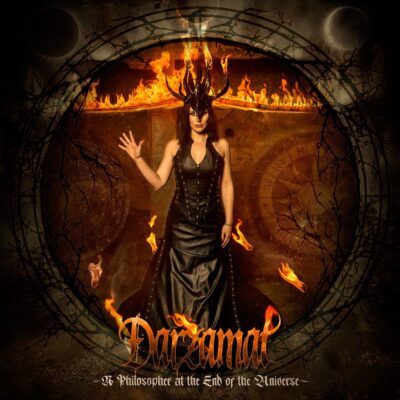 A Philosopher At The End Of The Universe