“Athanati” (“Immortal”) is the debut album of Greek melodic black/death metallers LLOTH. Just to remind you that Lloth is the band that found Maria “Tristessa” Kolokouri (R.I.P.) prior founding Astarte.
Lloth recorded an EP only (“Dancing in the Dark Lakes of Evil”), which we will release on CD soon under the name of Astarte. The band reformed by Tristessa and her husband (and member of Astarte at that time) Nicolas Maiis. Lloth are continue the legacy of Tristessa and under the guides of Nicolas Maiis with Setesh, Vaelor (guitars) and Acheron (bass) they recorded the album “Athanati”, which is dedicated to Maria ”Tristessa” Kolokouri.
“Athanati” is a real masterpiece of extreme metal, including melodic guitar riffs, brutal and angry vocals, amazing rhythms, which all together complete an amagalm of black and death metal, a classic of Greek metal sound, that is a must for fans of bands like Rotting Christ, Nightfall, Varathron, Septic Flesh, Amon Amarth, Satyricon, Arch Enemy, Dissection and Hypocrisy!
Including guest vocals by Sakis Tolis of Rotting Christ on “Emptiness”, Efthimis Karadimas of Nightfall/The SlayerKing on “In The Name Of Love” and Androniki Skoula of Chaostar on “Tristessa”.
Mixed/mastered at Tico-Tico studios (Impaled Nazarene, Nightfall, Moonsorrow, Sentenced, Sonata Arctica) in Finland.
Amazing cover artwork handpainted on canvas by Timo Wuerz (Acheron, Astarte, Necromantia, etc)

Tracklist:
Athanati (Immortal)
Archos
Pan
Born In Sin
In The Name Of Love (Sacrifice)
Alles Black
Hell (Is A Place On Earth)
Emptiness
Tristessa
I (Dead Inside) 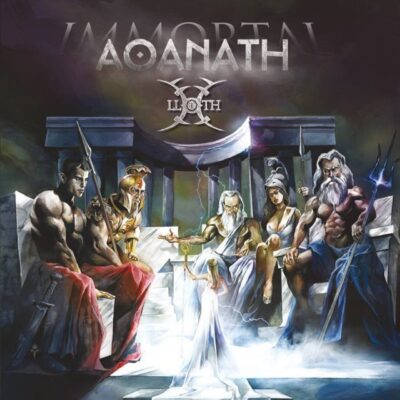