“WWII: Memories For The Future”

Limited edition cd+DVD of the new album of Rampart!
RAMPART is a female-fronted heavy metal band, led by the singer Maria Diese. After touring numerous countries in Europe, RAMPART has won the position of one of the most hard-working bands in the genre, distinguished for the classic songwriting and the impressive style and manner on the stage. Over the years, the band’s efforts have resulted in four full-length studio albums – Voice of the Wilderness (2009), War Behest (2012), Conspiracy (2013), Codex Metalum (2016) and the mini-cd A Tale To Cold (2012).

RAMPART had the pleasure to share the stage with SAXON, KREATOR, QUEENSRYCHE, FLOTSAM AND JETSAM, ANVIL, HOLOCAUST, UDO DIRKSCHNEIDER, SCANNER, BLAZE BAYLEY, SUSPERIA, HATE, ARKONA, WITCHBURNER, CRIPPER, LONEWOLF, and many more. In 2016 the band has been supported by Wacken Foundation for its „United Opus of Apocalypse and Staging Tour” that covered 28 dates in different countries. RAMPART’s story highlight is the participation in Wacken Open Air 2017.

Now, RAMPART are ready with the release of their 5th album “WWII: Memories For The Future”. The main topic line of its lyrics is conceptual and features less known historical facts about the most far-flung, destructive, and lethal war. “WWII: Memories for the Future” marks the end of a global war and reminds us of its aftermath which has laid the groundwork for the world we’ve known for seventy-five years.
To be released by Sleaszy Rider SRL on 2 July 2021 in standard edition and as limited 2-cd (cd+DVD) edition. 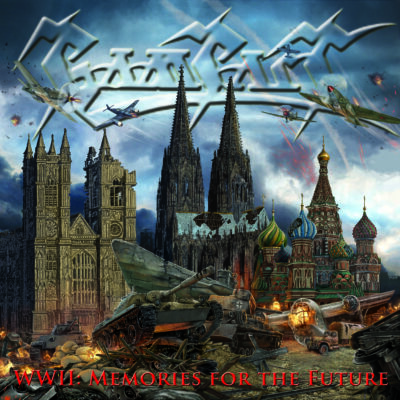